What Makes a Good Storyboard?

Storyboards are the blueprint of film and animation. They are also important tools to explore narrative, action, structure, drama, pace, lighting, camera angles and visual effects. Storyboards also form the reference for musical scores, set design and interactivity. The most exciting thing about a good storyboard is that it is the first step for a script onto the screen.

Our storyboarding technique is designed to be fast, capturing key elements. We then refine into greyscale marker visuals once we know the key frames are correct, and we may then work up into digital panels assembled into a digital presentation if requested by the client. Storyboards can be coloured if required but it adds to cost and we would only recommend if colour treatment were an essential part of the project.

Sometimes 3D elements are needed as part of complex storyboarding projects and we use a range of tools to develop panels as well as animatics. This can be useful for exploring an environment with an animator. Storyboards are, in some ways, similar to comics and can sometimes create a very powerful visual narrative when drawn outside of the usual linear box format. Some of our storyboarding work gets developed into comic book format or used as the basis for animatics. 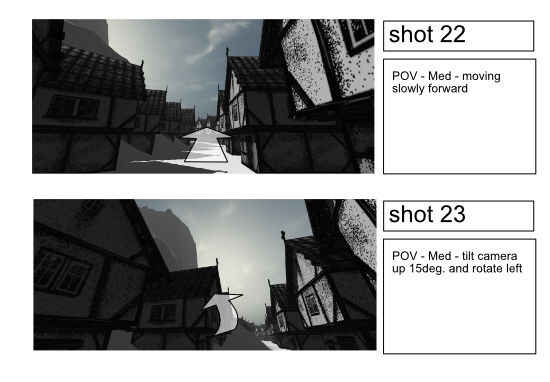 The next step of explaining the script and testing it with the storyboard is building a simple animation with the key frames of the storyboard and add in voice and music with relevant cues for action.

Films are the ‘heartland’ for Storyboards. Storyboards are not just important for production, they can also serve as an important part of the financing process. Creating a visual impact that can tell the story in a clear and engaging format has often helped gain investment, and in the case of Sir Ridley Scott, his storyboard work for Alien gave enough confidence to Twentieth Century Fox to double the budget. Not all directors have the skill to clearly storyboard out for others to see their vision for a project. Not all artists understand the visual language of film or have the experience of sequential art and that’s why a storyboard artist can be a very good investment.

Script writing is still an important part of a music video production, but they are not designed to capture dialogue as such and can be more a guide to establishing story concepts behind the lyrics. We work with the producer, songwriter, musician(s) and director to create a story that can support a piece of music. Storyboarding for a music video not only gives everyone in production on a shoot reference to work from, it can sell a concept to a label and provide some assurance for investors and sponsors.

Less than 30 seconds – sounds like it’s not worth the time to storyboard out a concept for a TV slot, but anyone involved in TV advertising will know how vital it is to get every detail right and approved by the client. The costs of TV advertising are still high and any vagueness can cost a production company time and money and make it harder for a client to understand the creative pitch. Working with our film production partner LoveLove Films we deliver nationally TV Broadcast advertisements.

The process is the same for developing storyboards for games and interactive media or other applications. Presentation within an interactive environment, however, means that it’s possible to see the narrative flow on the screen and test branching (looking at multiple different directions to “branch” into) whilst giving animators the chance to see how to setup environments and characters, camera angles and work much in the same way as a director. Some studios may even have a director as part of their process. We use Nevigo’s articy:draft 2 for designing interactive narrative.

Storyboarding for software development uses a different format for demonstrating UX – the User eXperience of an application. The HCI, Human Computer Interface of an application or a website needs to be designed to adapt for information flow, user choice and feedback. Creating ‘wireframe’ models and testing user behaviour forms a critical part of a development specification and makes development better, saves time and money as well as making delivery expectations clear. Our user experience team has over ten years experience in developing specifications for a range of mobile, web and desktop application specifications.

Testing the feeling of story development and engagement for a narrative based game explores decision branching and NPC (non-playing characters) reactions to player choices, achievements, and a range of other activities within the games that players can affect. The complexity and volume of work requires traditionally required the use of cumbersome spreadsheets and formulas or testing development on the fly. We use articy:draft 2 developed by Nevigo, to work with developers to plan, design, test and deploy narrative based games and using articy server developers can deploy directly into their game environment.

Working with our partner Blue Sky, the UK reseller of articy:draft 2 and articy:server. If you would like to talk to someone about purchasing licenses please visit www.bluesky.co.uk.

Our customers think storyboarding is an essential part of their productions. We think it shouldn’t be prohibitively expensive. Whilst the process for generating a motion picture storyboard is time consuming, TV adverts, short animations and key elements in game play can be very costly without the investment of great storyboarding.

Our costing method is simple:

Storyboard revisions are costed by the keyframe.

If you are a producer or director looking for storyboard development for film and need an experienced artist who can work with Directorsm, D.O.P.s, scriptwriters and quickly produce boards for budgets, pitches and production, we can help.